It’s been a long couple of months coming, this anxious waiting to see if the country would support our LGBTIQ community. And then it was like the final stretch of the sprint, and the bill was screaming through parliament after conjecture that it might take over a month.

And marriage equality became a reality. 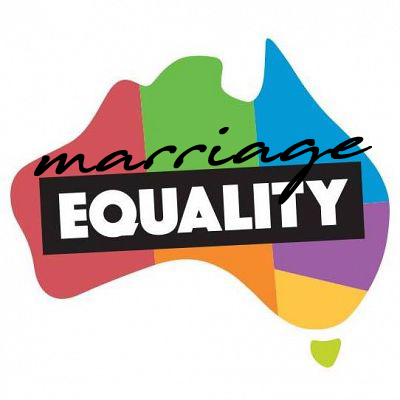 And where was I? On FB messenger, talking business and spirituality with a friend, and she’d been silent in her typing for a little bit of time. I pause, wondering what’s happening on her end, till she comes out with: “Wtf girl, who cares? Marriage equality just passed!!!”

And I start crying.

As someone who is a female bisexual, and their loved one (conveniently) is in a male body, I had the privilege – and I say that with a touch of wryness – to be able to legally marry my beloved all those years ago. I watched as friends also within the LGBTIQ community, in love with someone of the same sex, were unable to make that same legal commitment.

So now that this law has passed, I am so over the moon I’m doing laps and heading further off into the cosmos.

And as a celebrant, I’m even more overwhelmed, because I’m one of the truly lucky bastards who’ll have the honour of standing with the new couples making their vows to each other. Of holding that sacred space with them, as they declare their love for each other.

I remember someone asking me, as this issue was coming to the fore a couple of months ago – well, really it’s been around for yeeeeeeeeeeeeeeeeeeeeeeears – whether I would be marrying “the gays.”

While the words may not be the most eloquent, they should speak very loudly about my beliefs on ALL peoples being equal and able to have access to all the same legal rights and supports. And yesterday, as that become a reality, I was shocked by how emotional I became. Not because I was crying – that’s become something of the usual as I got in touch with my emotions a couple of years back.

No, I was emotional because the people I love can show that love in a totally, utterly, completely, 100% legal way. I know how many of them there are, who have been waiting for this moment.

Waiting, not just for commitment ceremonies, or registering with the government as a committed couple (if they wanted something more formal), but waiting to ring up a celebrant, book in for a ceremony, and know that it will as EQUALLY legal as any other couple doing the same thing.

As my tribe, my community, my amazing people begin their foray into legal weddings, I offer you some sage advice: